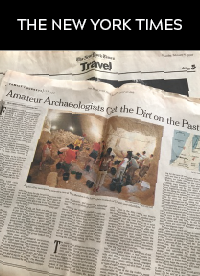 Amateur Archaeologists Get the Dirt on the Past

Four families, with members ranging in age from 5 months to 40-something, stood in a semicircle around Yoav Bruck, a 31-year-old Israeli and our archaeological guide for the next three hours. In an effort to define a “tel,” Mr. Bruck recruited a 12-year-old volunteer and collected five baseball caps from his audience, which he stacked on the boy’s head.

“So after the New York Yankees were all killed off,” said Mr. Bruck, lifting the cap off the smiling kid underneath, “the Michigan Wolverines built a new city and settled here. And after them, the Toronto whatevers came and built a city on top of the rubble left by the Wolverines. And so on.”