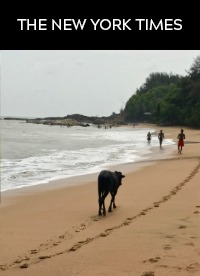 At a Yoga Retreat in India: Beach Walks, Body Treatments and Healing

Motoring along the mouth of the Aghanashini River, our torsos stuffed inside bulky, bright-orange life jackets, we passed a fishing village and a patch of sandy shoreline called Paradise beach. “There! There!” shouted a woman from the back of the skiff, pointing to a dolphin she spotted in the distance. Our young local captain cut the motor. Watching, we waited in silence. And when our group’s yoga teacher, Larissa Carlson, began to chant the sound of om — a Sanskrit word symbolizing the union of body, speech and mind — and the rest of us joined in, creating a collective, continuous round of the humming syllable. As if awakened by the vibrations of our call, a pod of dolphins emerged, leaping through the air, one after another. This, I thought, is going to be an unusual journey.