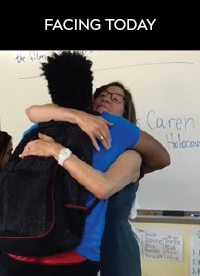 Passing on a Survivor’s Legacy, One Hug at a Time

“If anyone would like a hug, please come up to the front of the room,” I announced to the class of 30-plus eighth graders at I.S. 254 in the Riverdale section of the Bronx. Silence fell upon the previously antsy and animated kids. Did they think I was joking? Why was I, a total stranger, inviting them to embrace me after recounting my mother’s experience as a hidden child during the Holocaust? Realizing how strange my comment must’ve sounded I added, “When my mother used to speak in classrooms, like yours, she always offered the students a hug afterwards, and now that I am sharing her story, I would like to continue her legacy.” The awkward silence broke when an African-American boy nearly a foot taller than I, hopped off the library table where he’d been perched and came up to wrap his long, skinny arms around me.