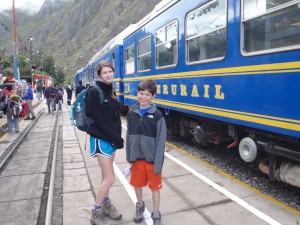 After writing my first post about Peru, I was all excited to write the follow-up. The trip had been amazing, and there is much information to share. But something kept me from getting to it and I kept on re-adding it to my “to do” list without actually doing it. Keep reading and you’ll find out why.

When planning our trip, I got some wonderful guidance from a colleague who works for Mountain Lodges of Peru. I would’ve loved to do their four night lodge-to-lodge hiking trip, but didn’t think my 11-year-old was ready all that hiking. I was eager, however, to hike part of the Inca trail,and Nadia advised me that we could obtain a permit to hike from Kilometer 108 into Machu Picchu.

With her help, we got the necessary permits and met our guide, Dalmiro, at 6 am the morning of our departure. Together, we hopped aboard the Perurail train in Ollantaytambo for the 45-minute train ride to Kilometer 108. Across a bridge over the raging Urubamba river and through a check point where our passports and hiking permits were reviewed, we began what we were told would be a five to six hour hike. 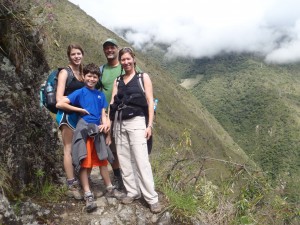 Along the Inca trail.

One of the world’s most popular treks, the Inca Trail is a magnificent, well preserved route which connects Machu Picchu with what once were other regions of the Inca empire. The first three hours of the trek are largely uphill, but along the way there are covered areas that resemble covered wooden bus stops, where you can stop and rest, drink water, and eat a snack. There are parts of the trail that are very steep and involve climbing lots of steps, and areas that have been damaged by land slides. The trail is fairly narrow most of the way, so walking single file is the safest way to go. As you ascend, you can look to your right and see the drop-off below, and the jungle-like mountain side that descends into the river a thousand feet below. 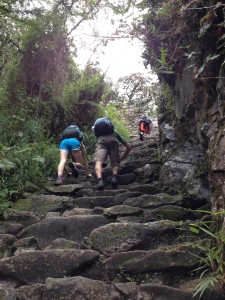 Steep stairs along the trail. 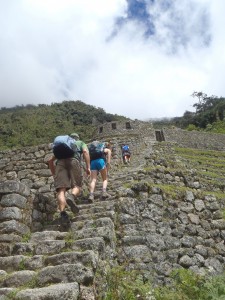 And now, the reason I hesitated to write about this part of the trip…

After several hours of hiking, we rounded a curve on the trail and on our right, there was a wooden hand rail – an obvious precaution for a somewhat precarious passage. My daughter, son and I were walking ahead of my husband, and our guide, Dalmiro, was the last in our group of five. My husband, Rich, once a marathon runner who now suffers from bad knees, placed his hand gently on the handrail. The kids and I heard a loud snap, turned around and saw him tumbling slowly down the mountain side, until he suddenly stopped by wrapping his legs around two baby bamboo trees. Dalmiro descended about 10 feet below the trail edge, reached for Rich’s hand and carefully lifted him back onto the trail.

It was one of those moments where everything stopped in time. While dangling on the side of that mountain, my husband had no idea how treacherous the potential fall would’ve been and how lucky he was that those two bamboo trees were there to save him. That said, I’d hike the Inca trail again tomorrow. The mishap was a fluke, and my only words of caution would be to NOT lean on a water-logged wooden handrail.

Once we all pinched ourselves, we continued our trek, saying very little. Dalmiro, who had hiked this trail over 300 times, had never witnessed what he saw that day. (He later reported the faulty handrail to Machu Picchu security.) 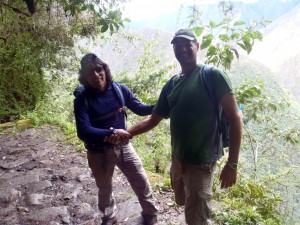 Dalmiro had brought us packed lunches which we carried in our backpacks along with lots of water. We found an area to sit, near a small clearing where campers had pitched tents. We ate sandwiches and rested a bit, and then moved excitedly on our quest to reach the Sun Gate.

Many visitors to Machu Picchu climb an hour up to the Sun Gate to catch the amazing view. We got our first glimpse of “the lost city” by finishing our hike – after 4 1/2 hours! – and entering through the Sun Gate.

Elated to have arrived, alive and intact, we took in the impressive sight below and the surrounding beauty.

Weather is an important unknown at Macchu Picchu because of the altitude – 8,000 feet above sea level. We entered with a clear blue sky, and on the following morning experienced the ruins in a thick mist. Both brought their own sense of drama. 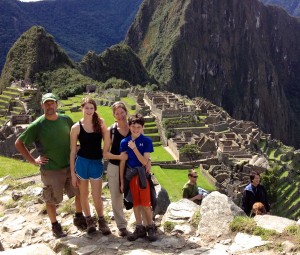 Dalmiro gave us the history of Machu Picchu, explaining that while it is the most widely-known and visited of the Inca cities, it is not the most

important. The pre-Columbian 15th century Inca city, had been long abandoned, until its discovery in 1911 by the American historian Hiram Bingham. Since 1976, thirty percent of Machu Picchu has been restored and the restoration continues until today.

Much to the delight of my kids, there is a bunch of alpacas who’ve taken up residence in Machu Picchu, and we walked the ruins until we were able to get up close. 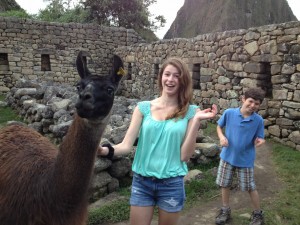 We met an alpaca family passing through.

My one regret during this journey was not staying at the Inkaterra Machu Picchu Pueblo Hotel. A short bus ride down from Machu Picchu to the village of Aguas Calientes, the Inkaterra has 85 casitas bathed in nature and its own bird sanctuary. And Dalmiro told us, that’s where Mick Jagger stayed!

Our final stop in Peru was Lima, the country’s capital city. We took the train back to Cusco and hopped a flight to Lima where we headed for the Miraflores Park hotel. Situated in a park, steps from the Pacific Ocean, it was an ideal spot for our overnight and the rooftop pool was a welcome addition. 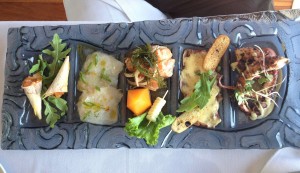 With only one full day in Lima, we strolled through the bohemian district of Barranco, stopping in a park to relax near some Peruvian families. We walked over the Bridge of Sighs and made our way along the beach, watching the surfers and sun bathers, until we arrived at Cala, an oceanside restaurant serving up what Lima is well known for – 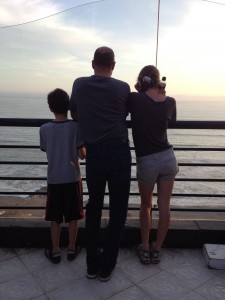 We spent the afternoon walking into the historic center and through the Plaza Mayor, or main square, watching the locals salsa dance and looking at the street art. Our final evening and meal was quite special, as we spent it at Astrid & Gaston, a restaurant known as the most innovative in Peruvian cuisine. Every dish was a beautiful spectacle of fresh fish, colorful sauces and local ingredients fused together.

It was the end of a beautiful journey. Peru impressed me greatly, offering so much in culture, color, cuisine and adventure. And my husband – well he has a new lease on life after this trip. One we will never forget.