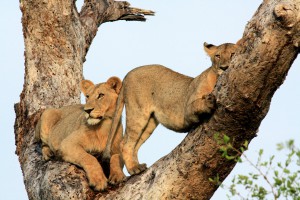 Sunday evening television was pretty sacred when I was growing up in the late 1960s and ‘70s. Although Laugh-In held the top spot in my house, I’ll never forget the mesmerizing wildlife images of Mutual of Ohama’s Wild Kingdom. Fast forward several decades and there I was – in the wild kingdom – or more specifically, on safari in Botswana’s Okavango Delta.

A land-locked country in southern Africa, bordering Namibia, Zambia, Zimbabwe and South Africa, Botswana is home to the world’s largest inland delta – the Okavango. With the help of Discover Africa, an Ohio-based agency specializing in travel to Africa, our 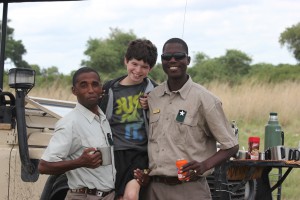 Each morning, we were woken up at 5:00 am for a light breakfast before heading out on the first of each day’s two game drives. At Vumbura, our two guides, Rain and Sevara, taught us about life on the delta while guiding us on dry land, through watering holes, and in mokoros (wooden canoes) traversing the floodplains.

During our game drives, we came across wildlife that I’d only before seen on TV or in movies, such as 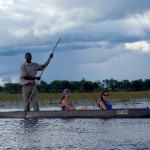 Out of Africa. We came up close to a hyena den harboring young babies, a leopard both guarding and then eating her kill (an impala), which she’d stragically placed in the branches of a tree, a herd of 14 elephants cooling off in a watering hole at sundown, hippos swimming in the early morning, a bachelor herd of 8 buffalo, a warthog and her babies taking a mudbath, and multiple sightings of lions, giraffes, zebras, sables, antelopes, owls, storks, and more.

By the time we returned after our morning game drive, we were hungry for lunch. That was followed by several hours of rest and relaxation, ending with 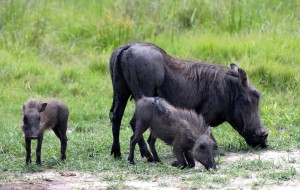 4:00 pm teatime, and then a few more hours out on the delta before dinner. Tiring yet exhilarating, eye-opening yet hair-raising, safari made the concept of the food chain an up-close reality. The schedule was the same each day, but what we saw was often new and exciting.

The wildlife experience continued at Chitabe, a slightly larger camp with eight tents. The terrain here was different from Little Vumbura; it’s drier and there are so many dead trees around that it reminded me of a Tim Burton movie. Nevertheless, game is plentiful. Here, we had our first sighting of the almighty male lions who when they weren’t sleeping, strutted like the kings they are, flaunting their handsome mane. We came across a large pride of lions in which two cubs were 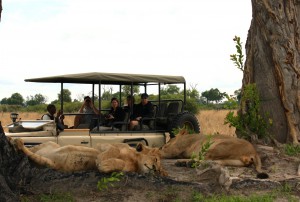 suckling their mother, an agitated male elephant that nearly charged our vehicle, and a leopard who was stalking a herd of impala but never went for the kill. We saw a group of zebras, which I now know is called a dazzle.

On our last night on safari, we had dinner in a boma, a traditional outdoor African barbecue, where traditional foods, such as burivos and pup, are cooked on an open flame. Admittedly, I had mixed feelings when I was instructed by our African waiter 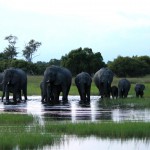 that the tradition is to prepare a plate of food for my husband, kneel down and present “my man” with his meal. Let’s just say I played along and enjoyed my own plate of delicious African dishes.

Our final game drive culminated in an eventful find. Luke, our guide, was notified via radio that there were some lions lazing around so we went to check them out. Once we crept in 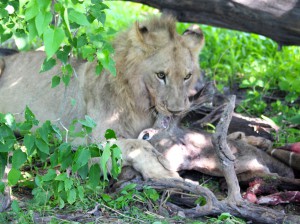 to get a bit closer in the comfort of our 4 x 4 Land Rover vehicle, we saw one of the lions feasting on last night’s kill, a large kudu. From a mere 10 feet away, we watched the young male lion rip the kudu’s ear off, alternating between licking around the eye and tugging at the ear with her teeth.

This last sighting was simultaneously disgusting and electrifying. Upsetting and illuminating. Viewing the wildlife in its natural habitat in Botswana has left an indelible mark on me. One I thought would only ever be accessed by Marlin Perkins and his Wild Kingdom episodes. And now, I have my own pictures to prove it.