Travels to the Sunshine State 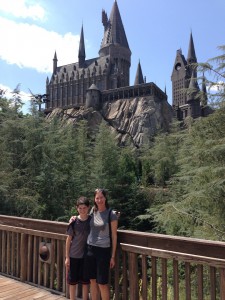 In front of the Harry Potter castle.

Two of the things I love most are travel, and time alone with each of my kids. A few years back, I wrote about the gift of those journeys and how much I, and they, gain from that time away together. (You can read that piece here.)

The latest was a four-day jaunt to Florida with my 12-year-old son, Simon. At home, Simon and I rarely get a chance to spend time alone. After school and on weekends, he’s typically doing homework, playing sports or video games with friends, or watching and talking sports with his father. Four days away alone would indeed force him to spend time with ME. And so we went.

For the firs two days, we hung out on the beach in southern Florida. We played kadima, and built a sand castle, complete with a moat, flags, and some shell accoutrements. We played tennis, went to the supermarket and watched a movie and some college basketball games (I had no choice during March madness). We ended the days in the hot tub, and together, plotted the next phase of our 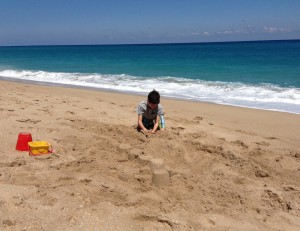 My son playing on the beach

The fun continued with two days in Orlando. I know my son would love me either way, but the fact that I am willing to go on thrilling, fast, upside down roller coasters did not hurt. We spent our first dizzying day at Disney, moving from one high-speed attraction to the next. We covered Magic Kingdom, Epcot and Animal Kingdom, racing from ride to ride (Space Mountain is up there, but Expedition Everest was my favorite), except for a quick lunch in the “Morocco” part of Epcot. We ventured to Test Track, an attraction where we first designed our own car and then took it for a spin around an outdoor track. If we’d had the time, the plan was to continue on to Disney’s Hollywood Studios and ride the Twilight Zone Tower of Terror. I was secretly relieved, however, that we were out of time and would have to skip that particular attraction as I heard it’s like being in a dark elevator that falls 13 stories. 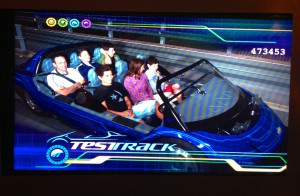 Once back at the hotel, we had little time to refresh before heading to downtown Orlando for the Orlando Magic basketball game against the Washington Wizards. After teaching Simon the art of negotiating a long taxi ride, we switched roles at the game. It was his turn to instruct me – about the players, the moves, the fouls, the rules. He also got to meet a former player, Bo Outlaw, who was at the game as a spectator. Who knew live basketball was this exciting? 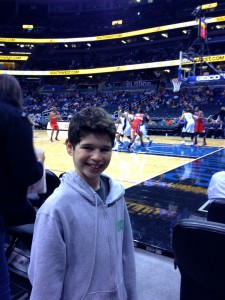 At the Orlando Magic game.

The following morning, we journeyed to Universal for another day of brain shaking rides. After riding on the Incredible Hulk Rollercoaster, I needed to take some deep breaths to wave off some of the dizziness. We got completely soaked on the Jurassic Park River Adventure, and opted for a poncho on Dudley Do-Right’s Ripsaw Falls flume ride. The highlight here was undoubtedly the Harry Potter area and it’s Forbidden Journey 4-D ride through the castle.

We weaved through the crowds, at times holding hands – something Simon would never allow at home. This, I realize is one of the beauties of being away. It’s just him and me and no one else matters.

Our time at Universal ended with the brand new Hollywood Rip Ride Rockit. It is the largest, fastest and highest roller coaster I’ve ever seen. Once on the ride, you get to choose your own 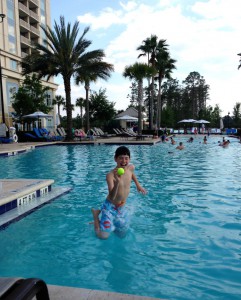 music, which is then piped into speakers by your ears. Simon picked rap/hip hop; I picked classic rock. I would’ve been happier with classical Mozart to reduce the pounding in my head by this point. After the ride, Simon announced he was ready to go back to the hotel to spend some time at the pool. Thank goodness.

We ended our day relaxing poolside. I thought I’d read my book, but instead found myself repeatedly tossing a tennis ball which Simon would leap into the air to catch before splashing into the water. I didn’t mind one bit. We laughed at some of my ridiculously bad throws, and at some of his pretty bad misses.

That night, over dinner, we talked about the highlights of our trip together. He’d tell me one of his; I’d follow with one of mine. We listed at least five a piece. The next morning, Simon said he wasn’t ready to leave. Nor was I. These were four precious days for me and my boy – ones we’d always remember.